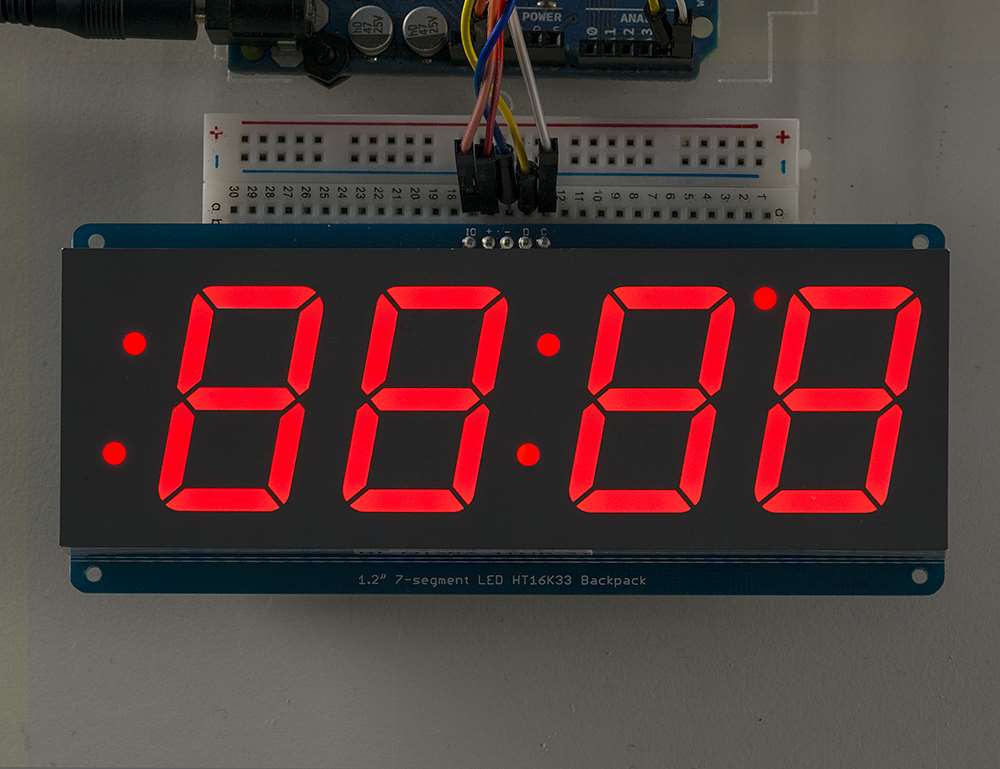 That’s not my photo in the banner, I got it from a search. I originally had the clock in the car from Back to the Future there, but just before publishing I realised it wasn’t in fact a seven segment display. Anyway, on to the topic at hand…

It’s kinda fun to create your own alternative languages. I mean, I’m no linguist or language expert by any means – I only speak one language. Poorly.

I don’t take these little languages anywhere, I just play around with letter shapes and if there should be a symbol for “th” or “sh” sounds and so on. If you want to take it further, you can start to define rules on grammar, how the languages are constructed. What qualifies as a word in your language? How is it read? Give it a go, create an alphabet, write a message, then test it by asking someone to translate between your invented language and a “real” language.

I was doing just this a while ago when I thought about constraining myself to a set of rules, specifically by limiting how I am able to write the individual letters. I quickly decided on using the Seven-Segment display as my limiter – Is it possible to write out the numbers and letters on these devices, whilst avoiding conflicts (an obvious one being “0” (zero) vs o (the letter)) yet maintaining readability?

Well, after a quick search I found this online seven-segment display, so I gave it a go. Here’s what I came up with.

Easy one to start with – these are all well defined already. In fact, 0-F (zero to F, hexadecimal) is fairly set in stone, though there are issues with A-F if we expect to take it all the way to Z.

Now we’re going to have to actually think about this. As already mentioned above the numbers 0-9 are well defined, and letters A-F (hexidecimal) are fairly consistent. Let’s try adding the rest of the alphabet without modifying any of the pre-existing symbols. 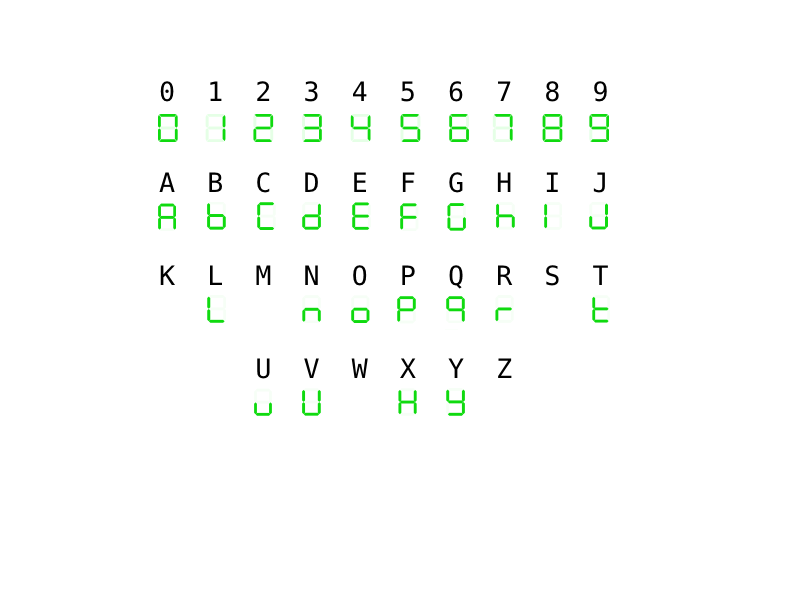 As you can see, we have some letters missing. There are a few we can put in there, but they begin to lose clarity as they don’t resemble the letter the represent very well. In particular, the ‘wide’ and complex letters (M and W are wide, K, S and Z are too complex for our limited rules) don’t really have a substitute.

I’ve also taken the liberty of specifying “H” to be lower case in the image above. This allows me to use a symbol that looks like a capital “H” for the letter “X”. I think this is an acceptable compromise, as X isn’t really used that often in English language.

We could get away with keeping the A-F letters as they are… however if we could make a couple of changes we’d be able to free up some symbols for later on in the alphabet.

I’ll allow for some more flexibility and try to populate the rest. Some of these won’t represent the English alphabet letters entirely. I’ll make all the changes blue. 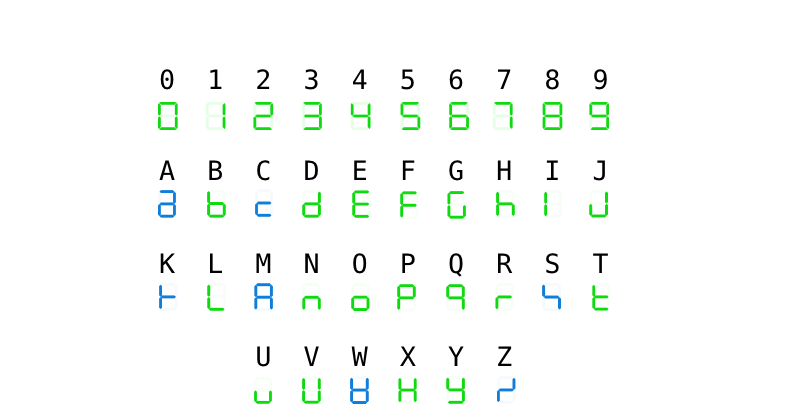 A changes, allowing me to use the previous symbol for the letter M. This doesn’t look anything like an M, but there’s too much complexity in the letter to represent it, so we have to compromise. And as an added bonus, if we compromise here, we can compromise elsewhere, too. Flipping the new M on it’s head gives us the letter W, just like real life!

I’m going to change C, too. You’ll see why later.

Giving K the symbol it has is the best compromise I can come up with. I can’t think of anything else we haven’t already used, with the exception of the X letter. We could use that, but then we just shift the problem on one step to that letter.

S and Z symbols are used by the digits 2 and 5, respectively. There remains no alternative that I can come up with, except to highlight the direction the letter travels as it snakes down the page. S starts in the top left, goes to the right, then sinks to the bottom right, finally finishing on the left. Z is a mirror of this. The middle section of these letters is called the Spine. These spines are unique to these two letters (I think?) so highlighting them in the way shown above seems to be the best option, though it is by no means perfect.

That’s our alphabet completed! We could do with some punctuation symbols though… 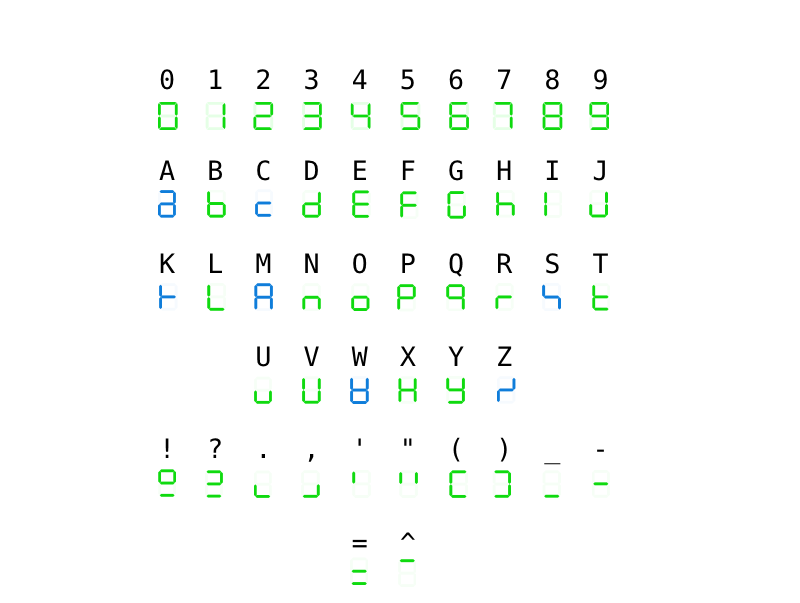 I’m not sure about the period (.) and the comma (,). I was thinking of just having the bottom left and bottom right segments lit for them, but they looked very similar. The only way you’d be able to determine what it was would be by the distance between the surrounding characters. But what if there weren’t any? Rare occasion, sure, but I thought I should clarify.

You can see here that I’ve used the upper-case C from before (I changed to lower case for the letter) to represent the opening brackets symbol ((). The others seem to work well enough and are fairly self explanatory.

There we have it! The alphabet plus some punctuation on a seven-segment display. I’ll leave the blue letters blue to highlight that they’re a little bit awkward (or non-standard in the case of the A and C.)