When we moved in we had a somewhat large Buddleja (or buddleia) hidden behind a veritable forest of weeds. After removing the old tree, the weeds were cleared away which exposed the Buddleja you can see to the left of the following image: 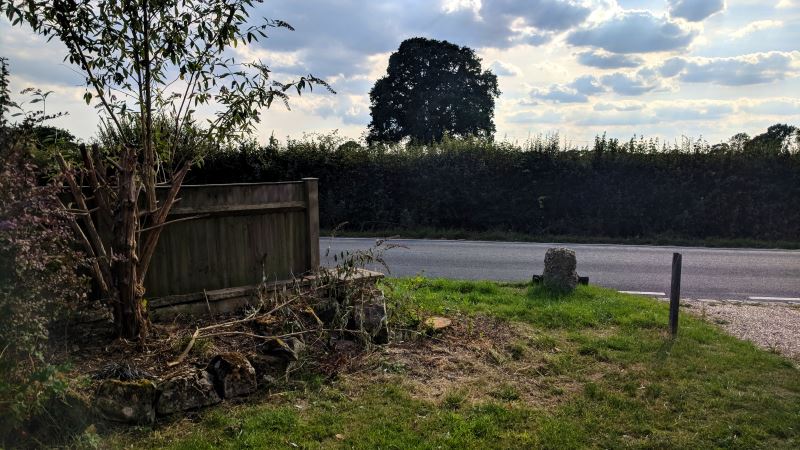 We found that although it was still flowering, 90% of the plant was dead. The trunk was almost entirely rotten – there was a single vein of living wood wound around the back of the trunk which fed the surviving branches. We had high hopes – we knew that if we could trim it down we might be able to encourage it to regrow from lower down and keep our butterflies happy.

If you look closely at the debris in the picture you can probably guess what happened next.

It turns out the several-feet-high weeds were acting as supporting scaffold, holding the Buddleja up. We had some decently strong wind during a storm one night and it tore most of it down. The rotten base gave way in just the wrong places and most of the surviving branches collapsed. With a feeling of sadness we decided to take the rest of it down and, after clearing out the (very stubborn) roots, we ended up with a nice raised bed to work with.

With the larger tree and the Buddleja gone, we felt we had to put something back. We’ve always wanted an apple tree and originally thought about planting it on top of the old evergreen which we cut down. Unfortunately we’d either need to rip the roots out or wait for them to dissolve before we could plant on top of it, so instead we cleaned up the raised bed a bit and it turned into the perfect place to plant a new apple tree!

If you want to plant an apple tree in the UK, generally the best time to do so (according to our research, though this isn’t the case for all apple trees) is somewhere in or around October. Luckily for us, it was October when the Buddleja came down, so we wrapped up warm and ventured out to a local garden centre. After perusing the somewhat limited options, we picked out a Red Falstaff apple tree, which is now happily sat in our front garden! 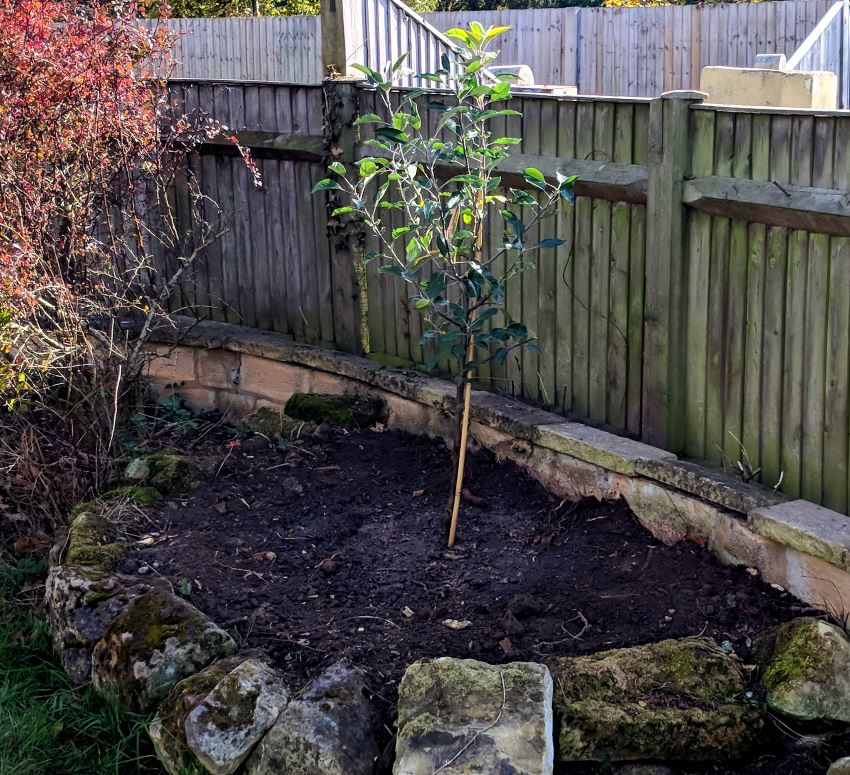 The Falstaff was picked partly because we liked the look of it, but also because it does not require a second tree nearby to cross-polinate as it is self-fertile. Though I’m sure there are some apple trees around somewhere, meaning we probably could have gotten away with another breed, we felt that a self-fertile tree was a good option on the off-chance that we were wrong as we haven’t  seen any other apple trees nearby yet. We’ll either get some fruit if there are no others nearby, or lots of fruit after humanity’s second best friends cross-pollinate it for us!

We have since put a grease band around it to protect it from pests, which was a horrible sticky job to do on such a thin trunk. It seems to be happy, but the coming winter will be the true test. Fingers crossed we’ll get some fresh apples next Autumn!